Here comes another short I shot with NYFA Cinematography students at Burbank Studios Stage 5. Next time no blood – I promise 🤞! 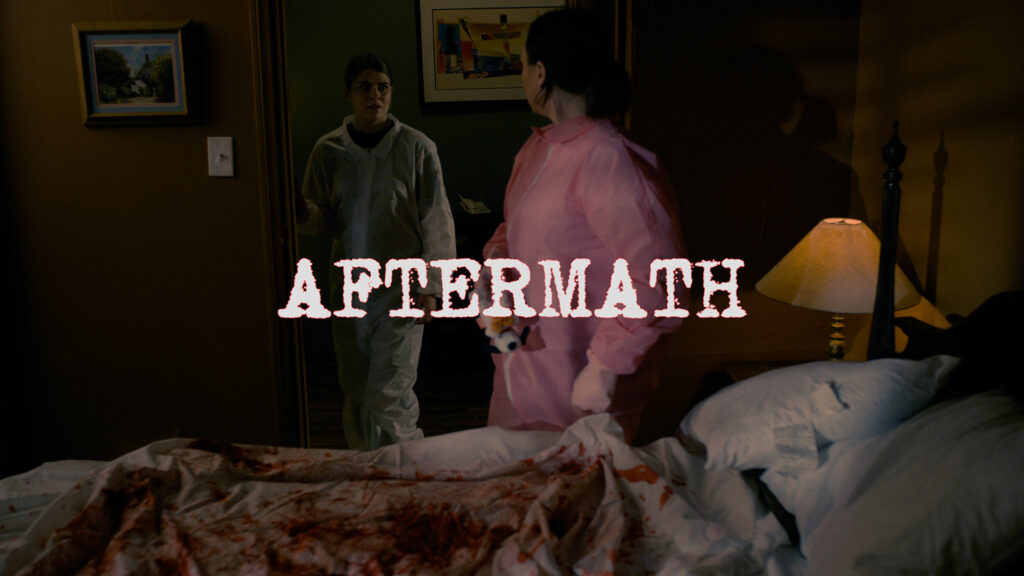 Thanks to all participants – this was a fun one.

Please enjoy this fun scene I shot with yet another great group of cinematography students at the New York Film Academy. 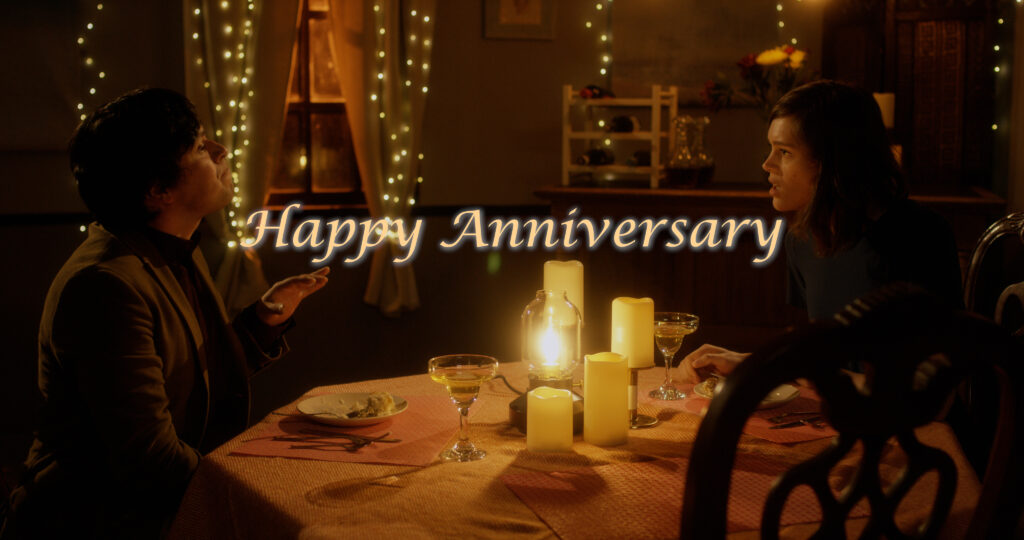 This is truly an anniversary as it marks the 20th practicum I’ve written and directed over the past years with Cine students at the New York Film Academy. Respect for all the hard work of the students and thank you to the NYFA Cinematography department for this unique approach to practical learning and preparing our students for the real world. After almost six years, I finally had the opportunity again to spend some time in an artist residency. Originally, I wanted to spend two more months in two other residencies, but due to Covid they were postponed, so I am particularly grateful that I was able to do at least half of the journey I had planned for this year.

The residency called LISA (Listafólkabústaðurin) is located in the old schoolhouse (Skúlin) in Tjørnuvik which is the northernmost village on Streymoy, the largest island of the Faroe Islands.

The small village of maybe 20 buildings and around 60 inhabitants is surrounded by large mountains and swooshing waterfalls. The village faces the open sea with spectacular waves which attract surfers from all around the world who can rent gear in a surf shack by the beach, even in October. From the shore, one can see two large rock

formations next to a towering cliff. Legend says that these were once a giant and a witch who tried to pull the Faroe Islands back to Iceland, but they turned to stone as the sunrise surprised them. The schoolhouse is right in the middle of town. It is a small two-story building with two bedrooms, a kitchen, and a large classroom where you can work. As an instructor, I felt right at home. The house felt very cozy, and the big room had a great positive atmosphere. I imagined how it was when school children attended classes here and there is still a blackboard, maps, and schoolbooks. The building was used as a school for the last time in 2005. In 2013, the town and the Sunda municipality decided to create an artist residency in the old school for artists looking for inspiration and solitude.

Tjørnuvik is connected to the public transportation network. Buses usually go in the morning and the afternoon and not during the weekend. If you are totally dependent on public transport it could be challenging. I rented

a car for the first and the last week and stocked up on groceries for the time in between. This way, I was also able to drive my luggage from and to the airport and used the bus system for return and pickup of the rental. The drive to the airport on Vágar is about one hour, by bus it takes two hours and you must switch lines twice.

The Faroe Islands have a great infrastructure including three subsea tunnels to connect some of the islands. The tunnels are simply amazing but also costly. Each round trip cost 100 DKK

(16USD) and for the Eysturoyartunnil it is between 125-175DKK (20-26USD) one way. This tunnel has the world’s first (and only) roundabout in a subsea tunnel. Technically you don’t need this tunnel as you can also take a bridge that connects these islands but depending on where you are it saves you a 90-minute drive. When you exit the tunnel, a picture is taken of your license plate and you pay online. In my case, I paid the rental car company after returning the vehicle.

Driving itself is save and fun although I sometimes found the drive to Tjørnuvík difficult as it is only one lane for both directions. Once in a while, there are short passing lanes so drivers can make way for each other. During the day it is sometimes hard to see if another

vehicle is coming and therefore it sometimes gets tight on the winding road. It is much better during the night since you can see the cars from far away but then you face sheep and geese that are suddenly standing in the middle of the road.

Sheep in general are all across the islands. There are about 50.000 people living on Faroe and 70.000 sheep. I tried to get good pictures of them, but they are rather shy and run away quickly. Only if you are driving, they tend to not run away from you or simply jump in front of the car erratically.

The landscape is simply monumental, and most roads are along the coastlines which guarantee fantastic vistas.

I spent a lot of time simply driving around and taking pictures from the side of the road, but I also took a lot of hikes which there are plenty to choose from. Some of them cost up to 30 USD which is a hefty sum.

I thought it was worth it but there are also plenty of free hikes one can take. Three hikes are right in Tjørnuvík. Two of these felt rather unofficial to me and I only found them with a Trails App. After an hour in, you must be rather confident in your hiking skills so I did not proceed. The most popular hike leads to Saksun, the neighboring town by beeline, and is easy to find as the entrance is marked by a sign. The whole hike takes about three hours, half of it a steep climb. I walked about half of it as I did not want to walk back and forth. The view is just majestic and as you reach the plateau, the terrain becomes even and quiet. You basically follow the stream up all the way from the village. Only on the Saksun side, a sign warns you that you should not take this hike during the hunting season starting in November.

Saksun itself features another beautiful and very popular easy hike alongside a black beach leading up to the ocean, surrounded by waterfalls and towering cliffs. The fee is about 11 USD and definitely worth it. I did this hike twice as it is easy and extremely beautiful.

Every so often, a gunshot echoed like thunder through the valley reminding me of that warning not to cross over to Tjørnuvík during hunting season. I saw a lot of hunting parties across the islands, especially over the weekend. I was told that they hunt hare, and I almost ran over one myself in the middle of the night on my way home – rather cute I must say.

A few times I drove to the capital Tórshavn to buy some things I forgot to bring. I became a regular in the local outdoor sports shop and was glad to buy a pair of decent Viking rubber boots which I needed for most hikes. You simply must cross small streams too often and after a week of wet feet, I had enough.

I also bought Devold long johns made from Merino wool and was wondering where they have been my whole life. Everything in Faroe,

so it felt, comes at a premium. There is not a whole lot of competing stores, and they can dictate the price but I also was very pleased to shop groceries at Bónus again which reminded me so much of Iceland.

One of my favorite things was seeing the shift from autumn to winter. When I arrived, everything was still lush and green, slowly shifting to brown and suddenly it started to snow, and it became all white. Road conditions became more challenging, and I sometimes wished for an AWD especially after fresh snow.

I was hoping to get a chance to see some Northern Lights and I did get lucky one night although the Faroe Islands are not necessarily the first choice if you want to see the Aurora Borealis. Tjørnuvík has a good position since it faces North and looks right towards Iceland. But the Aurora needs to be much stronger to be visible over the Faroe Islands. Also, the weather needs to be good, and I had a few nights where there might have been some activity, but it was simply raining. The islands do get a lot of rain due to the location right within the gulf stream and I noticed the temperature was “much” warmer than Iceland

as the geek in me crosschecked this on my weather app a few times. But I am grateful for the two nights of display of Northern Lights and I was indeed able to get nice shots of nature’s firework.

To conclude, I had an amazing time and a lot of quiet moments to reflect. It’s peaceful here and at least during October/November not overrun by sightseers like me. By the number of hotels and rooms you can tell that the Faroe Islands are still left alone by the

crowds that flock to Iceland and I hope that won’t change soon although a tourist bus with a large James Bond 007 paint job has me worried about the future, reminding me of the year we went to visit Oaxaca during Dia De Los Muertos right after Pixar’s Coco was released, a film I had not seen at that time I might add.

I took a lot of pictures and some videos. I traveled with two cameras, two tripods, a gimbal, a drone, and four lenses but found myself using my phone much more than I had anticipated. I can’t say I was lazy as I still carried everything else on my back while hiking.

I also started to work on the new script of a book adaption I just optioned. I hope to return soon and thanks so much to the town of Tjørnuvík, LISA, and the Sunda Kommuna for hosting artists in their former school. The magnificent house has been used as an artist residence since 1995 and it is the former home of the German-Jewish author Lion Feuchtwanger and his wife Marta. See the film on the VATMH Youtube channel or visit my Vimeo channel for a 4k version or a shorter version in German. Enjoy!

I am extremely proud that GREEN is still going strong and made the first place at WRITERS & FILMMAKERS. I now have the privilege to choose one script out of the top ten short scripts that won the writers’ competition. I will keep you posted.

I also encourage all to participate in this extremely innovative concept next year where writers judge filmmakers and vice versa. Go fund yourself because the more creatives join the competition, the higher the price!

To find out more about the competition please visit: http://writersandfilmmakers.com/portal/fm_home.aspx HALEEMA had a fantastic screening at LA-Shorts and was very well received. It was great that so many members of cast and crew were able to join us that night. Here are some impressions.